The Best Part of GermanFest is… 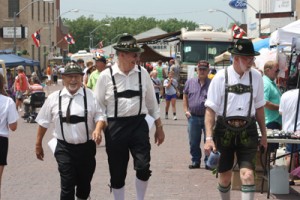 Every 2nd Saturday of July, Syracuse Nebraska hosts GermanFest.
It has all of usual activities associated with small-town Midwestern festivals: Music, dancing, races, beer, and games.  What GermanFest has that makes it unique are wiener dog races.  That’s right, wiener dog races.  They set up a gated five lane “racetrack” just off of main street in downtown Syracuse, half a block from the bar and right in front of a coffee shop selling brats with all the fixings and cold beverages.  The wiener dog races are a big deal, there are bleachers set up, announcing is done by a local auctioneering company and people from all over bring their dogs down to compete.

When it comes to the races themselves there are two classes; lil smokey for the smaller dogs and bratwurst for the bigger ones.  I have no idea how they make a distinction though I suspect it’s through a weigh-in as the bratwurst division dogs weren’t noticeably bigger but they were noticeably rounder.  They run heats of 3-5 dogs at a time depending on how many entries there are.  As you might expect of races involving dogs not known or bred for their racing ability the results are all over the map.  Some dogs shoot like bullets to the finish line and the resulting treat or toy that waits for them.  Other dogs are not so singularly focused and tend to wander, or circle back to their owners, or sit down, or roll over for tummy rubs.  This is not exactly the pinnacle of athletic achievement.  After the heats they then run a championship race for each class.  These races tend to be much closer (all the dogs cross the finish line) and believe it or not the crowd is in to it by then. After each class champion has been crowned they run one last race to determine the overall champion of the GermanFest wiener dog races. (Pro-tip: Bet on whichever dog has to be firmly held back by their owners and is barking up a storm, that dog wants to GO.)

There are a lot of great reasons to head to Syracuse for GermanFest. The BBQ competition is great, there are friendly people all over and there is even some traditional German folk dancing and singing during the afternoon. A concert with a “named” entertainer caps off the evening.  These are all good reasons to go.  But the best reason is the wiener dog races.  Do not miss the wiener dog races.  Come down to Syracuse for GermanFest.