Spend a day in Nebraska City 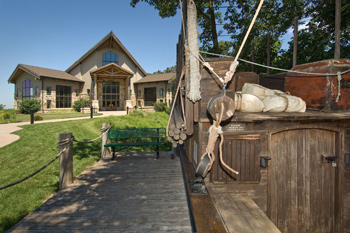 If you’re looking for a nice little getaway, a day in Nebraska City can give you a ton of options without breaking the bank, especially if you’re interested in historical or educational attractions.  I know that between Arbor Lodge, the Mayhew Cabin, the Missouri River Basin Lewis and Clark Center, Kimmel Orchard and Vineyard, and El Portal Mexican Restaurant we certainly had a full day.

A friend and I decided to get out of Lincoln one weekend and head down to Nebraska City for the day, she had never been to Nebraska City and I’d never been down on my own with the freedom to just wander around and see what was there.  Here’s the thing for those of us from Lincoln and Omaha, we have great big blinders on regarding much of the rest of Nebraska.  I mean we know that it exists but generally we don’t have much experience or knowledge of what’s out there.  For a great many of us our knowledge of Nebraska City is as follows: home of Arbor Day, on the way to KC.  This was an effort to change that, at least for the two of us.  We’re both interested in history so we mainly focused on that and you can absolutely fill a day in Nebraska City.

Our first stop was the Arbor Lodge Mansion.  The Mansion was the family home of the Mortons, the people who started Arbor Day and founded the Morton Salt Company.  It started out as a four-room home back in the 1800’s and has grown into a sprawling three-story mansion.  The first two floors are largely preserved with period furniture and family heirlooms.  There is information about each room that points out pieces of interest and historical tidbits.  The third floor is full of artifacts and displays that give the history of the Morton family and the surrounding area.  If you’re interested in the history of Nebraska or history in general a visit to Arbor Lodge is well worth it.

Our next stop was the Mayhew Cabin and John Brown’s cave.  They have a neat little museum that offers up history of slavery and the abolitionist movement in this part of the country and it’s quite interesting.  It’s also pretty quick work, we made it through the museum portion in about 10 minutes then headed outside to see the cabin and the cave.  The cabin gives you a pretty accurate representation of what the living quarters were like for some of the early settlers in southeast NE.  The cave itself is meant to highlight the history of the Underground Railroad in SE Nebraska.

After we left the Mayhew Cabin we headed out to the Missouri River Basin Lewis and Clark Interpretive Center.  This place is absolutely a must-see if you have kids.  It’s loaded with interactive exhibits that highlight a number of different aspects of Lewis and Clark’s journey to the Pacific NW. It covers a lot of ground from historic exhibits that focus on the tools and technology of the era as well as the naturalist work that the pair did cataloging the plants and animals that they encountered that were as of then mostly unknown to white Americans.  They also have a number of exhibits and trails on the grounds that allow for more exploration.

Our last “educational” stop of the day was the Kimmel Orchard and Vineyard.  Unfortunately due to our timing and the harsh weather in Nebraska the previous spring there wasn’t a whole lot of orchard activities to do so we made do with spending some time “educating” ourselves on local wines.  It’s really a great thing about Kimmel, no matter what time of year or what’s going on you can always stop in for a wine tasting.

By the end of the afternoon we’d had a pretty full day, had a little wine, and what we really needed was dinner.  Now this can be a hurdle in small towns on a Sunday because as we were criss-crossing Nebraska City we noticed that a lot of places were closed.  So we did the only logical thing, we asked the nice lady serving us wine at Kimmel where to eat.

On the local advice we headed to El Portal Mexican Restaurant.  The food was good, the service was great and the prices were fair.  Honestly I don’t know what more you can ask for.  Actually you can ask for margaritas.  We didn’t try the margaritas, (downside of having to drive home) I’ve been assured by locals that they’re great but should not be consumed by anyone driving.

There you have it, it was a pretty full day, we had fun and actually learned a lot about the history of Nebraska and Nebraska City.  Just goes to show you that sometimes you need to break out of your bubble and see what else is out there.  Take a day and head down to Nebraska City and do some exploring of your own.